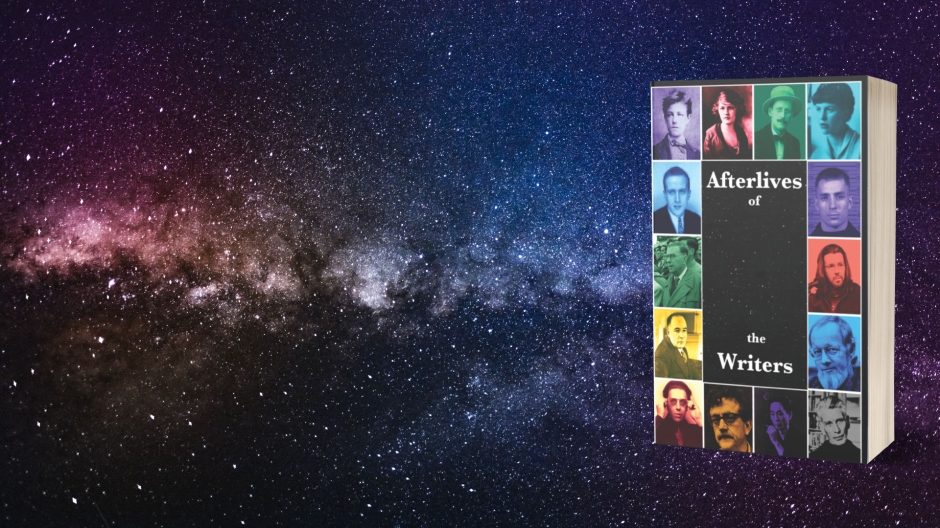 Imagine a fictional world in which all your beloved (or despised) dead writers get one last swan song from beyond the grave. Do they find themselves in “heaven,” “hell,” or something far stranger? And will they ever get around to answering some of literature’s greatest mysteries for us, such as:

•Why did Rimbaud stop writing poetry?

•Is Hell other people, as Sartre theorized?

•Will Joyce ever return to Dublin?

•Was Jack Kerouac actually a Buddhist, Catholic, or both?

•Just how much was Zelda Fitzgerald plagiarized by her husband?

•Do all Brontë sisters go to Heaven?

•What type of Hell could ever surpass Beckett’s angst for life?

•Did Kawabata accidentally leave the gas tap on?

•What would Hunter S. Thompson’s politic opinion of our present be?

•Why did Oscar Zeta Acosta disappear in the Sea of Cortes?

•And just what kind of music does Boris Vian play in the hereafter?

George Salis: What was the inspiration behind such a literally/literarily morbid concept?

5th Wall Press: I’d already been working with the concept of writers in the afterlife in my last novel, and though my main characters were fictional amalgamations of historical figures—mostly related to the history of French art movements and subcultures—I did have real writers show up as well. And when those real writers did show up it was much easier to write them, as if writing about them in their actual historical setting created a limitation between my fiction and their lived reality, so when I placed them in the afterlife, my imagination was freed up. I really liked the possibilities of this and wanted to explore it more in vignettes (that is: 3,000 words or less-ish). At first, I conceived of the collection as something I would do myself, an excuse to research lots of writers and artists and play out what might happen given such a situation. Though, as I planned it out and debated who should be included, and who I would have the motivation to undertake, and how artists would be tricky seeing as they’re not all known for their writing styles (though of course it could be done via 3rd person) I realized the task was too much for me, and that it would be fun to open the idea up to others. I did end up doing a few myself, but the amount of information, passion, and imagination others had for the concept and their own beloved (or for some despised) writers carried the collection in places I would’ve never gone myself.

A note on the morbidity of it: I think it’s actually quite beautiful in most cases—this person you may have identified with so much actually exists onward after death and you get to have this imaginative excursion into what might be, and what they now think of their former lives back on earth. Given, the Samuel Beckett vignette is as gruesome or even far more gruesome than seemingly life was for Beckett on earth. So it’s not all sunshine and roses and jugs of wine for our writers, some died tragic deaths, but even then they’re all vindicated by having their voice return to the living once more. And I imagine as others read this collection, the writers they identify with will get a sort of multivalent re-interpretation imaginatively, and their voices will multiply in various new ways across readers’ minds. Maybe they’ll be inspired to write their own afterlife vignettes.

GS: Martin Amis said that writers always die twice: first their talent, then their corporeal form. What do you think of such a sentiment?

5WP: Hmm, so the idea that writers get worse as they grow older, if I’m understanding that correctly? Like their style gels too much or they run out of ideas? Their fame weighs them down? They become alcoholic conservatives who are barely coherent, like Kerouac; or they go die in obscurity chasing colonial riches in Africa, like Rimbaud? Well it can also be said that Plath took her own life at the height of her poetic powers, Ariel was her masterwork completed only weeks before her death. If a writer’s talent is congealing in later life, perhaps they just need new experiences to shake away the cobwebs. Perhaps they need to push themselves into experimental forms compared to what’ve they written before, just for the sake of it, not for their readership’s established expectations.

GS: Which writer from the anthology, or in general, do you wish had lived longer (or forever)? Why?

5WP: I would’ve liked to see Rimbaud live longer, and return from his African expedition for riches broke, and realize he’d become a cult figure and leader of the Symbolist movement. And rather than accept that position he’d openly denounce it, and he’d reinvent poetry yet again, like a punk in his 40s finding somewhere inside himself the ability to think completely futuristically—given the first punks were revivalists and futurists at the same time, or you could say no-future-ists. Maybe there’s a book there to be had, the alternate history of Rimbaud, where he lived and gave us a reason why he grew to hate poetry so much. Also I think it would’ve been interesting if Sartre lived longer, all the way into the 2000s, what conclusions would he come to about such armchair anarchists as Chomsky, or what’s happened politically in the United States. I think if he’d kept living, he would’ve gotten more and more radical, which is not usually the norm in most older intellectuals.

GS: Which missing writers were you hoping to see in the anthology?

5WP: Well I had several scenarios for vignettes I never ended up making, one because I didn’t want to overwhelm the collection too much with my own work, and two because some of them would’ve taken a lot of work. One would’ve been a reimagining of Sartre’s No Exit with the three figures being Beauvoir, himself, and Camus, there to torture each other for eternity, but also to perhaps come to some conclusions about just went wrong in politics and their relations and their differences of opinion on philosophy and what’s going on now. But seeing as for me it’d take a lot of research to feel I could give such a scenario justice, I never did it. And a writer submitted a Sartre vignette that worked well, so that ended the idea—at least for this collection. I also imagined a future life for William S. Burroughs as a tomcat living in St. Louis of the present day with an alley cat friend who’s actually Mark Twain—I’m not exactly sure where that one was going to go, but that was the initial idea, and I ended up reading a massive biography of Burroughs in preparation, but never wrote a sentence on it. I wanted to do one on Herman Hesse, too, where it takes his Journey to the East concept of this secret society of mystics and time-traveling historical figures and intermixes that with perhaps the mechanics of The Glass Bead Game, with a little Steppenwolf angst, and a lot of picaresque, picturesque rambling through idyllic landscapes. And lastly, I thought it would interesting to have an Oulipo-inspired vignette that was several vignettes in one of ordinary people dying from all around the world, sort of like the idea of Harry Matthew’s Singular Pleasures, but told in several styles à la Exercises in Style by Queneau, and restricting the use of afterlife, death, heaven, hell, and other expected words in reference to Georges Perec’s A Void, which removes the letter “e” from the entire text (amazingly, Perec did this in French and then someone translated it into English using the same restriction).

GS: What would you say to someone who thinks that the anthology is in ‘bad taste’?

5WP: Bad taste? In what way? Like we’re speaking for other writers? Or it’s too much like fan fiction? To me if anyone called a book in ‘bad taste,’ I would ask them if they were a time-traveler from the 19th century, hadn’t they heard that everything in ‘bad taste’ was now popular, and that all bourgeois morality had been obliterated through commercialism, postmodernism, deconstruction, kitsch, and hypercapitalism? Or were they really so behind the times?

GS: What are the chances that the deceased in question have created an anthology about the contributors with the title The Beforelives of the Writers?

5WP: The Beforelives of the Writers? You mean, before we’re famous as writers? Or before we’ve actually lived a whole life? I doubt they care much about us, they’re too busy getting on with eternity, we’re just like critics, who’ve fictionalized their experience even more than the critics did. They might hate us and we’re lucky if they do. If they haunt us, I think we can take it as a compliment, but I doubt they will. Not to say our writing isn’t good, they’re likely just sick of all writing about them by now. Or perhaps they read our collection and have a laugh. Or comb the university libraries reading wacky critical theory about themselves, because they’re bored. Or perhaps they’ve all reincarnated in the present or future by now, and are artists or filmmakers because they feel writing is dead. Or they’ve gone back to the past to rewrite their history.

GS: Is a sequel in order? What is next for 5th Wall Press?

5WP: Well I don’t think there will be an anthology thematic sequel to this collection, but I’ve been thinking about my own sort of sequel, where I can play out some of the scenarios I talked about above. I have a lot of ideas for future anthologies for 5th Wall Press. The working title of one is Nonhumana: or the Many Opinions of Species Other than our Own. That is, a collection where the protagonist(s) are non-human, and may or may not have opinions on humans. Species isn’t really the right word though: because besides animals, plants, or even aliens, I want to open it up to inanimate objects, abstractions, even fantastical creatures if it doesn’t get too fantasy and still veers towards literary fiction. That is one of many ideas I have.

5WP: Hmm, well I wouldn’t want to prepare any last words, seems too kitschy. But a novel or album or piece of art or film or all four I create before I’m going to die, because I know I’m going to die, might be pretty powerful. Like David Bowie making Blackstar knowing he’s going to die. So I suppose I want to go out knowing I’m going to go so I can prepare an artistic acknowledgement of that to be viewed after I’ve gone. Though honestly I want it released before I die. I want to see any reaction there might be. But I don’t think about death that much, like most people I assume—even though I want to believe in a fantastical afterlife of possibility, it could also be the void, and that’s depressing, haunting, and is morbid. Also, I work too much currently, and at some point I want to work a whole lot less and do a lot more art, so I want to go old and ready to go. Younger people aren’t supposed to die yet. That 27 club thing is wasted potential.

George Salis is the author of Sea Above, Sun Below (forthcoming from River Boat Books, 2019). His fiction is featured in The Dark, Black Dandy, Zizzle Literary Magazine, The Sunlight Press, Unreal Magazine, and elsewhere. His criticism has appeared in Isacoustic, Atticus Review, and The Tishman Review, and his science article on the mechanics of natural evil was featured in Skeptic. He is currently working on an encyclopedic novel titled Morphological Echoes. He has taught in Bulgaria, China, and Poland. Find him on Facebook, Goodreads, and at www.GeorgeSalis.com.