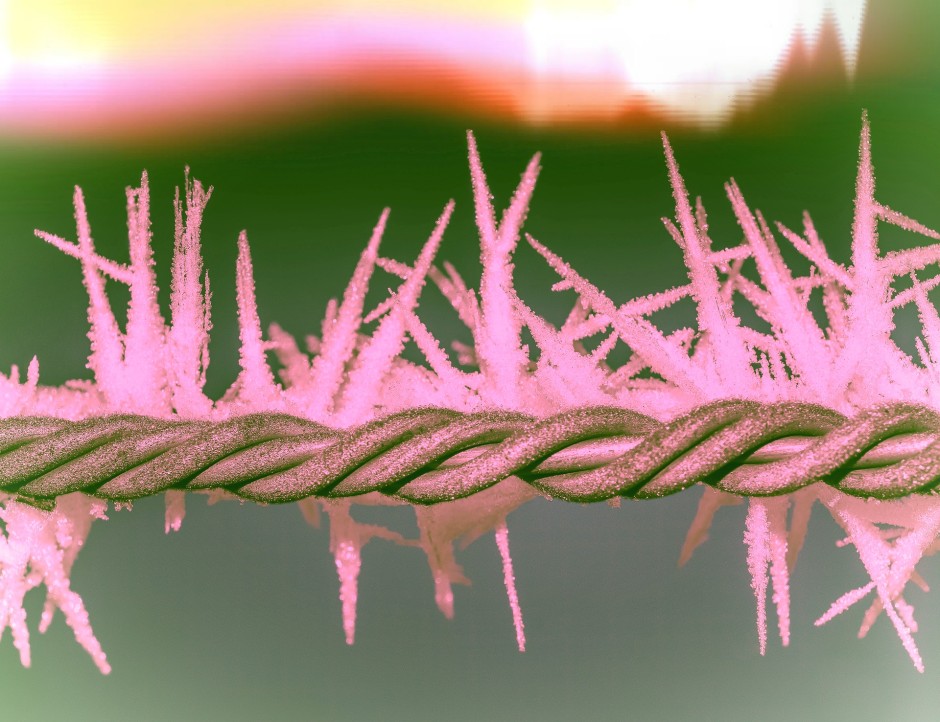 Lust, malcontentment—you build yourself a mousetrap: the bait is the mouse.

Droves of X mill about on this side of the barbed wire-topped fence. On the other side are wide open fields of dusky flesh. Temptation drives everyone mad. Howling like macaques. Tumbling over one another in unquenchable lust. Grasping arms reach through rents in the chain link.

Though she’d been sure she was like a penitent on the northern wastes, waiting perseveringly for the grand and the sweeping, now she finds that even she is just another X lusting for dusky flesh.

She hyperventilates. Claws at her clothing.

But then the night sky yawns like a lion, and it starts to rain nails. Bellatrix raises her slender arms, wrapped in barbed wire, and tries to shield herself.

Bacteria that gobble oxygen swarm around her. She panics. Can’t breathe.

Several thousand decadent and dissipated businesspersons wearing unnecessary hats all loosen their neckties, cling to the barbed wire-wrapped handrails of the swaying trains, and grow nauseous. Bellatrix sees this and also grows nauseous.

Then emptiness arrives. A shallow, bloodclabbered, alkaline, bonfire-huffing, mundane emptiness that shreds philosophy and sprinkles it on the face of the waters. Her body is wedged between its teeth.

Fetters sprout from her ankles. She shakes them off, and they sprout again. Grief flakes like rust from the chains.

She finally falls into the corner of a trompe l’oeil and tries to conceal herself till dawn.

Dawn breaks and Bellatrix rises. She hasn’t walked far when she runs up against a gang of tough young philosophers. Wearing leather togas. One toying with Occam’s switchblade. “You’re on our turf,” scowls the leader. “Let’s get ad hominem on this bitch!”

She sprints up a darkened alleyway, scrambles over another chain link fence. They hoot and catcall behind her, but she’s gotten away.

There’s a skeleton in my skin, she muses, moved by the sight. I’m always too early for early. I’m always running late for late. She swoons.

An X stumbles dreamily past, thrice-three-times as lovely as necessary. “You just want my tongue on your injuries, don’t you?” she croons in the X’s uncomprehending ear.

But a wave of heat knocks her down. Glass-blowers sweat rivers as the fire burns high. Sea and sky are contending for mastery. “We’ve got your number now,” they say. She can’t stand against the gale.

She sees an X walking through the storm, but he isn’t blown by it. He’s sealed in an administrative vacuüm. He’s the nosy man of everyplace.

Bellatrix knows him of old, and says to him, “I’m never too surprised by the cloudy way you glide by—the replies you try not to supply—the elided love you yet deny.”

And the nosy man of everyplaceretorts, “Your up-and-at-’em attitude has fully wrecked my rotten mood. I find it tedious to say why I can’t stand the easy way you still continue to survive but never really feel alive.”

This is Bellatrix’s mournful rejoinder: “Nothing but a dissipated sinner out to hustle up another dinner—your low unquiet soul and vain ambitions; never hungry but for what you’re missing.”

And, this longtime dudgeon finally shed, she rests her head on the chopping block and awaits his swashing blow.

All the while, as Bellatrix sleeps, her guardian angel hovers over her.

“I wish I could protect you,” he whispers, “on those rare occasions when people take your side—and you deserve for them to.

“You built your castle of ten-yen coins. I wish I could dim your vision.” He sighs. “Fate could give you relief – but perhaps I can’t.

“I wish all these blinding lights would stop flashing at you,” he murmurs fondly. “I wish you could stop losing your shit.”

The guardian angel gazes wistfully on her frail fingers resting on the coverlet. “Good people will always hate you,” he thinks sadly. “Only the guardian angel community even really sees you. Oh, how we ache.”

But deep inside the contrevoyant dream, Bellatrix thinks, “I am not a problem to be solved. I am not sadness seeking happiness.”

She frowns in her sleep. “I’m nature’s mistake.”

Dale Stromberg grew up not far from Sacramento before moving to Tokyo, where he had a brief music career. Now he lives near Kuala Lumpur and makes his living as an editor and translator. His work has been published here and there.