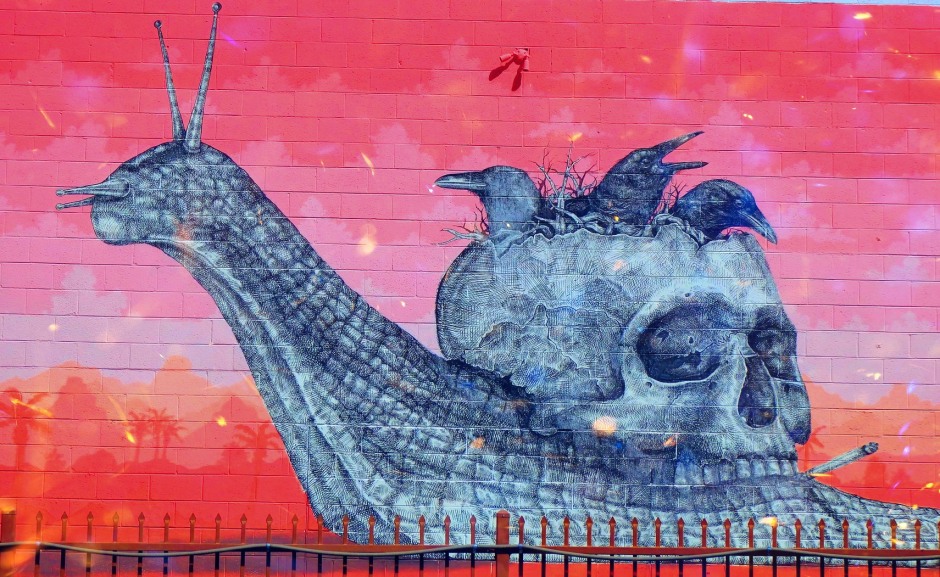 George Salis: Dies: A Sentence explores the stream of consciousness of a dying soldier during WW1, and his thoughts aren’t exactly time-tethered. In a way, La Medusa makes a city sentient. On one side of the spectrum, people believe that consciousness is skull-bottled while others think it pervades the universe, even at the level of the individual atom. Where do you fall on this spectrum and what are your thoughts on the nature of consciousness in general?

Vanessa Place: How would we know? We are bounded little bottles, and that’s my fascination, our brute finitude coupled with our capacity to imagine otherwise. The idea of divinity, its real imagining, is much more interesting than the divine, its imagined reality.

GS: La Medusa has been referred to as the Ulysses of Los Angeles. What do you think of this comparison? Do you accept or reject it?

VP: It is a lovely thing, this comparison. Not without some premeditation and ambition seeded within. The general conceit is similar, to render a city in its particulars, the corporality of Dublin in the 20th century next to the neural nature of Los Angeles in the 21st. Joyce, the master of the modernist snow globe, every snowflake hermetically wrought, cascaded into the consciousness of the contemporary castoff and cast about, doomed to limits of the skull dome and the fits of its imagination. What’s next, that’s the question…

GS: Dies is a single, amazing sentence. In the spirit of this book, can you tell me what some of your favorite sentences in literature are?

VP: Sentences are of two, maybe three, varieties. There are the gems, that’s poetry, the single thing that stands shining, staying the moment. There are shopping carts, that carry their content dutifully to the cashier, that’s common prose. And then there are those that manage to ongo in tandem, or as mirror-twins with an agenda, the language tickling the tongue that trips. There’s no ranking in this, of course, because it depends on the rhythm of the thing. Sometimes the simple sentence is perfect, the down-note at the end of a terrific riff. Yes.

GS: Do you see yourself ever returning to the novel form or is it not novel enough?

VP: I write as a sculptor, each object meaning itself only. While I suspect myself of formalism, the form must fit the projects—Los Angeles must be a novel, war must be a sentence, metaphysics a series of court cases. Meaning—maybe? I have a few projects, but nothing at the moment that insists itself as a novel.

GS: You are the co-founder and co-director of a feminist literary publisher called Les Figues Press, established in 2005. What does feminism mean to you, particularly in the context of literature?

VP: Feminism is simply, or not so simply, the expectation and demand that women must also be free to be. As for literature, this is the freedom to imagine universally, precisely. And with real ambition. I admire ambition in women only.

GS: Your work exploring racism has been called by some people racist period. Amid this current cult of outrage, have you been forced or influenced to change the way you approach race relations through your art? What about in the context of the recent civil rights demonstration and the Black Lives Matter movement? In general, what do you think is the role of art in terms of race relations? Is art’s role as simple and perhaps as blunt as what Salman Rushdie wrote in The Satanic Verses, “to name the unnameable, to point at frauds, to take sides, start arguments, shape the world, and stop it from going to sleep.”?

VP: There are four questions here, and I take them in order, and in the order presented. Art has its own demands, and some of what might be seen as my stubbornness in certain pieces has to do with a servitude towards them. To change my work would be to betray the work as a work. It may be flawed, it may be misguided, but it is as it will be. This does not mean my mind is as stubborn. The George Floyd protests in New York, the first night, happened outside my window as I was watching a documentary on Weimar cinema. This seemed right. For as we see too clearly in this slice of history is the need for a utopian solution to a dystopian situation is infinite, and that what qualifies as utopia and dystopia is contested. My wish, aptly envie in French, has always been to remain in this, the awful and hopeful—awful, in part, because hopeful—present. My goal, aptly but in French, has always been to never not consider race. Race is what we are given, part of all of our American compositions, and I would be un-American if I avoided race, pretended as if I were not raced, did not have my own fleshy caches of knowledge and ignorance. As for fraud, if race is a performance of race, as it may be, then there are no frauds, just good and bad performances, meaning both those that merit applause or hissing, and those that ring more or less true. Shaping the world, that’s a fantasy of mastery that I find distasteful, there’s too much of that inherent in the given of whiteness. There is never a forcing of any of this, only a recognition and a reconciliation. And some grappling. My answer seems staccato to me, like bullets. Perhaps this is the form that this discussion is taking, like history. As for sides, there are those one is born into, choiceless, and those of one’s choosing, regardless. Though I don’t know if sides as such are as interesting as the fact that there are sides—this is fascinating.

GS: What is a novel that deserves more readers?

VP: I cannot answer that question. Novels are like lovers, we love the ones we love, sometimes jealously, so their disclosure is a privilege given to a privileged few, sometimes generously, as if wanting a bit of applause for our selection. Deserving has nothing to do with it.

GS: You’ve said that the poetry of your rape joke performance is to be found in the schism of the rape joke coming from a voice and body that wouldn’t normally tell such a violence-implied joke. How do you think this translates to paper and ink, now that the jokes have been published as a collection?

VP: I’m not sure. Certainly the reader reads in their own internal voice, as inhabiting and inhabited in their own body. The book was a performance text, my performance text. The reader has their own performance, their own schism, possibly, or their own unity, depending. And both have their own violence and their own resistance. I work, have worked, in a world with a great deal of violence, and when violence is ongoing, jokes will be told. I simply inverted the who that did the telling. Although this does not answer the larger question of how the joke relates to this violence, and what is the violence felt by the entity telling the joke. One of the critiques of the book is that the jokes are not funny. I disagree, many are funny, at least a little bit funny, but that’s not the point of the book. Or perhaps this is the only point of the book, I don’t know.

The schism is within.

GS: Speaking of poetry performances, is there a certain performance you’ve attended that continues to stay with you, influence you?

VP: Of poetry? Poets are often not precisely performers, and often are rotten even at that imprecise performance. But I can name some names. Not by way of influence, but the thrill of appreciation. I recently heard a video of the Russian poet Lidia Yusupova read, and loved the lightness of her voice in poeticizing everyday violence. And many performances of Kim Rosenfield and Divya Victor have stuck as performances that should be more recognized as art—including the use of the body of the poet as the way things are. Christine Wertheim is also fearless in this. Last year, I saw Holly Melgard and Joey Yearous-Algozin perform as pure pleasure, poets truly performing being poets. In a cafeteria, where no one paid attention, even to the poet’s blood on the floor. It’s the voice, you know, an awareness of its singular capacity and of its emanation from its discreet body, a body that moves, as an object in space, as its timbre becomes another sculpture.

You should have asked me about opera.

GS: What can you tell me about your experiences with opera?

VP: I have a passion for opera, one of the lesser-known facts about me and one of the lesser-appreciated tragedies of the pandemic. Pre-, it was a biweekly pastime, also pursued while traveling, especially in Paris. There are operas that I adore (mostly bel canto), and particular singers (mostly sopranos and mezzos), who I follow (and have even flown to see)—these are the performances that make me weep.

Can’t order sopranos in terms of preference—like translations of Dante, depends on the mood at the time. Garanca wins the mezzos, though.

VP: I see an eternal stranger. Eternal, at least, to me.

George Salis is the author of Sea Above, Sun Below. His fiction is featured in The Dark, Black Dandy, Zizzle Literary Magazine, House of Zolo, Three Crows Magazine, and elsewhere. His criticism has appeared in Isacoustic, Atticus Review, and The Tishman Review, and his science article on the mechanics of natural evil was featured in Skeptic. He is currently working on an encyclopedic novel titled Morphological Echoes. He has taught in Bulgaria, China, and Poland. Find him on Facebook, Goodreads, Instagram, and at www.GeorgeSalis.com.