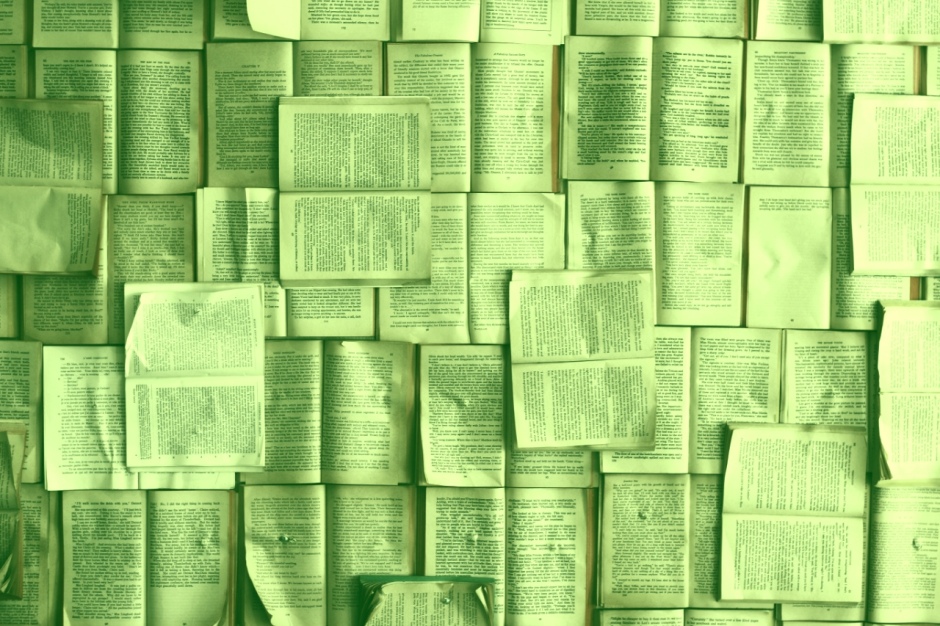 The Collidescope is an affiliate of Bookshop.org and will earn a small commission if you click through those specific links and make a purchase.

George Salis: You have a wonderful book vlogging channel on YouTube called Leaf by Leaf. How did it come about? I was there pretty much at the beginning. The first video of yours I watched was about Jim Gauer’s Novel Explosives and in that one you’re not in front of the camera. Did the notion of putting yourself out there prove to be a bit of a hurdle?

Chris Via: Back in June 2019, I came across Harry Mulisch’s The Discovery of Heaven and wondered if there were any decent reviews out there. For whatever reason I searched YouTube instead of Google and a video from paperbird’s channel came up as the first hit. The visual aspect of seeing the book and its pages while listening to someone with obvious passion for serious reading seized my attention. A still, quiet voice whispered that I should do the same.

There were several trial runs including The Tunnel (Gass, not Sabato), A Naked Singularity, Gravity’s Rainbow, and others. But with each of these rehearsals I realized how scrambling the camera is when its unblinking eye is boring down on you. I was (and still am) hyper-aware of myself, measuring each tic and stutter, mired in the turmoil of my inner fact-checkers and editors challenging every word from my mouth. Finally I landed on Novel Explosives and it made so much sense because of that cover art: Leaf by Leaf was exploding onto the scene and making a proclamation of what kind of channel it would be. (Of course, this vision of an enigmatic channel bursting forth in a blinding light was conceived in humble irony.) Plus I had recently read Gauer’s debut novel and loved it. I wanted more people to read it. That, above all, is the mission of my channel.

Why I started off behind the camera is simple vanity. I do not like the way I look when I talk. My mouth doesn’t look right. The words coming out don’t match the movements of the jaw or something. Perhaps it’s the off-centered split on my bottom lip that gives this illusion. But someone told me that viewers were more drawn into a video if they see that there is a real, common person reading and enjoying the books. I still remain acutely self-conscious and cannot get past certain repeated words (“um” and “struck” being most prominent) but I think I’m getting more natural. I still have to edit a lot.

CV: There are absolutely, without a doubt obligations for the reader. Books of any worth are an invitation to a relationship through conversation. Of course, it depends on what you’re using the act of reading for, but for this answer I am making two assumptions: (1) the text is demanding; and (2) the reader is interested and willing to work for its fruit. Harold Bloom said that this type of reader demands more difficult pleasures. I think that’s perfect. I want to chase the books that are hard to get. This involves giving myself over to the book’s world and terms, setting aside my own predispositions and opinions as much as possible. I have to be patient and read closely, looking for allusion, symbolism, patterns, enjoying aesthetic gymnastics. I need to bring a certain amount of foreknowledge to the table, too. This means, if a book is preoccupied with a certain type of, say, rocket, I may need to spend some time looking up information on that rocket to get more from the text instead of getting miffed because the author didn’t explain everything to me. Lately I keep thinking of Karen Swallow Prior’s imperative from her book On Reading Well: Demand books that make demands on you.

GS: Who are some critics/reviewers you admire and why? Are there specific reviews you’ve read and have thought of as being the quintessence of perfect criticism?

CV: My critical heroes are Harold Bloom and Steven Moore. My favorite reviewers are Michael Dirda and Marilynne Robinson. Harold Bloom, despite all his rough edges, has taught me more about the appreciation of the aesthetics of literature and the importance of the western classics than anyone else. Moore is an addictive energy source of literary scholarship and passion for big, complex books (I mean, he said he wanted to be buried with his copy of Darconville’s Cat!). Whether he is writing an exhaustive study of the novel’s origins in ancient times or dashing off a one-paragraph review on Amazon or for Rain Taxi, you feel compelled to read everything he mentions. He is directly responsible for months and months of budget overages in my household. Marilynne Robinson is such an impressive thinker. I have read all her essays and fiction and reviews. Her ability to take a big, daunting, seemingly hemmed-up theories and poke a hole at just the right place is the equivalent of a magic trick. As for Michael Dirda, he is massively well read and an expert at the well-chosen quote. His reviews and essays and columns are so pithy and entertaining that I always feel affirmed in my life as a dedicated reader. I read him as one reads Montaigne.

CV: I agree with that. When I write a review—professionally; not on, say, Goodreads—I follow a tried-and-true format: (1) opening remarks with thesis; (2) plot overview; (3) themes and symbols; (4) unique highlights of the book; (5) reiteration of thesis with conclusion. Writing 101. Opening, supporting evidence, conclusion. Essentially an opinion essay that persuades or dissuades a potential reader’s interest. And like the book, one must use well the tools of rhetoric to establish an ethos that compels the reader to trust your judgement. The better the writing, the more likely the trust. The quality of your prose as reviewer is the one shot you have to prove to the reader that you know what it takes to recognize good writing.

GS: You love big books and you cannot lie. Why?

CV: Let me quote the delicious opening of Sergio De La Pava’s latest novel, Lost Empress: “Now, no one who’s had any degree of intelligent seasoning doubts that thick women are the highest life-form. They better warp space-time, creating a gravitational pull ambient attention cannot resist.” In this sentence, swap “women” for “books” and it would be a great one-statement maxim for my literary tastes. I like to explore new worlds and unique Weltanschauungen, and for that an author needs lots of space which results in a thick book. My first big book was either Gravity’s Rainbow or Infinite Jest, but it imparted to me that “intelligent seasoning” which instantly transformed my palate. There is something to be said for brevity (it’s the wit of the soul, after all)—poetry being the foremost example—but, for me, opening a 1,000+-page book, reading that first page, feeling the density of the book in my right hand, knowing how many more pages are still there, fills me with joy and pleasurable anticipation. Like a grounding rod, it gives me a channel for all the electricity in my soul. It’s like beginning a relationship with someone about whom you know enough to know you’re a good match but little enough to know you’ve got many exciting days of discovery ahead. To give a more concrete and practical answer: At the end of each year, I look back on all the books I’ve read and it’s always the big ones I liked most.

GS: What is one book you think deserves more readers?

CV: One book?! At the moment, I’d say Novel Explosives. If the question were worded differently though…OK, OK, I’ll play by the rules.

GS: What videos can we expect from Leaf by Leaf in the future?

CV: I have three series I’m continuing. The Western Core series still has Paradise Lost, Pride and Prejudice, Faust, Wuthering Heights, Moby-Dick, Leaves of Grass, Swann’s Way, Ulysses, and To the Lighthouse. William T. Vollmann’s Seven Dreams series still has Argall, The Dying Grass, and The Rifles. And my Murakami read-through series still has The Wind-up Bird Chronicle through Killing Commendatore (although I’m currently trying to rekindle my enthusiasm for Murakami). I want to launch revised videos on Novel Explosives and The Recognitions. And some more videos to come: 2666; J R; Women and Men; Infinite Jest; Gravity’s Rainbow; The Book of Disquiet; Miss MacIntosh, My Darling; Darconville’s Cat; and more. I also have some ideas for some humorous videos, but we’ll see how they turn out.

GS: What advice would you give to someone who is thinking about reviewing books more seriously and/or starting a YouTube channel dedicated to books?

CV: As with any aspiration, study extensively those who do it well. Read loads of criticism and reviews. Subscribe to respectable journals that publish reviews. Inevitably you will begin by synthesizing and emulating those influences, but, eventually, your own voice will emerge. You will figure out what you do and do not like in reviews and center on your flavor. Above all, keep one question in front of you: Why should someone read (or not read) this book? Give specific reasons, i.e. do not say “this character was awesome” or “this book changed my life” without giving concrete supporting evidence. Reviewing well will only enhance your reading, and vice versa.

I’m no expert on the BookTube channel, but I can share a few pointers. Don’t think you’re the only one out there, but don’t get deflated over this either. There is a glut of channels in the community. Watch them for a while. This is just like the advice on developing your reviewing skills. What do you like? What do you not like? Then, establish the purpose of your channel. For me, my purpose is to present compelling reasons why someone should read a book that isn’t being marketed with the inexhaustible funds of the big publishing houses (or it has just been written off as a book to be suffered through in school—e.g. Moby-Dick or Don Quixote). Keep videos short (at least at first), post frequently (at least at first), network with other Booktubers, use social media—Facebook, Instagram, Twitter, Goodreads—to get your channel out there, and, most important of all, be genuine and have fun. Passion is contagious.

Chris Via holds a B.A. in Computer Science from High Point University and an M.A. in Literature & Writing from the Union Institute & University. For over 20 years, he has worked in the Information Technology field while immersing himself in pursuits of scholarship. As a writer, his vision is to blend various fields, think widely, and engage his readers in a mutual enjoyment of the results. As a book reviewer, his goal is to entice the masses to read great books. He started the YouTube channel Leaf by Leaf.

One thought on “Intelligent Seasoning: An Interview with Chris Via of Leaf by Leaf”

Leave a Reply to Chris Via Cancel reply